While scikit-learn already had some Generalized Linear Models (GLM) implemented, e.g. LogisticRegression, other losses than mean squared error and log-loss were missing. As the world is almost (surely) never normally distributed, regression tasks might benefit a lot from the new PoissonRegressor, GammaRegressor and TweedieRegressor estimators: using those GLMs for positive, skewed data is much more appropriate than ordinary least squares and might lead to more adequate models. Starting from scikit-learn 0.23, GLMs are officially supported by scikit-learn and intended to be (or hopefully) continuously improving. They were part of  the Consortium roadmap since the beginning of the adventure. Read more below and in the User Guide.

The world is not normally distributed

Like real life, real world data is most often far from normality. Still, data is often assumed, sometimes implicitly, to follow a Normal (or Gaussian) distribution. The two most important assumptions made when choosing a Normal distribution or squared error for regression tasks are1:

On top, it is well known to be sensitive to outliers. Here, we want to point out that—potentially better— alternatives are available.

Typical instances of data that is not normally distributed are counts (discrete) or frequencies (counts per some unit). For these, the simple Poisson distribution might be much better suited. A few examples that come to mind are:

In what follows, we have chosen the diamonds dataset to show the non-normality and the convenience of GLMs in modelling such targets.

The diamonds dataset consists of prices of over 50 000 round cut diamonds with a few explaining variables, also called features X, such as ‘carat’, ‘color’, ‘cut quality’, ‘clarity’ and so forth. We start with a plot of the (marginal) cumulative distribution function (CDF) of the target variable price and compare to a fitted Normal and Gamma distribution which have both two parameters each. 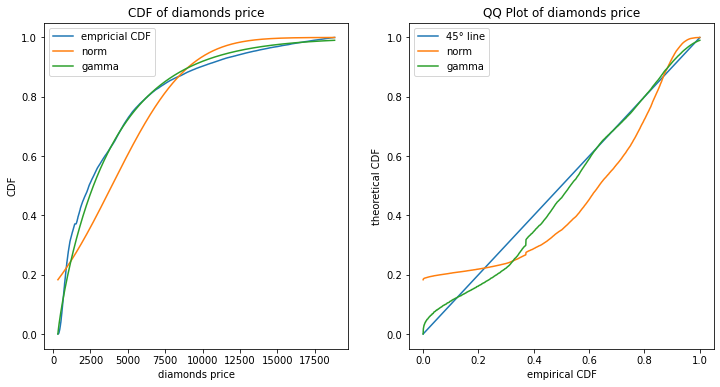 Let’s start with a more theoretical intermezzo in the next section, we will resume to the diamonds dataset after.

GLMs in a Nutshell

GLMs are statistical models for regression tasks that aim to estimate and predict the conditional expectation of a target variable Y, i.e. E[Y|X]. They unify many different target types under one framework: Ordinary Least Squares, Logistic, Probit and multinomial model, Poisson regression, Gamma and many more. GLMs were formalized by John Nelder and Robert Wedderburn in 1972, long after artificial neural networks!

The basic assumptions for an instance or data row i are

where μi is the mean of the conditional distribution of Y given xi.

One needs to specify:

Note that the choice of the loss or distribution function or, equivalently, the variance function is crucial. It should, at least, reflect the domain of Y. 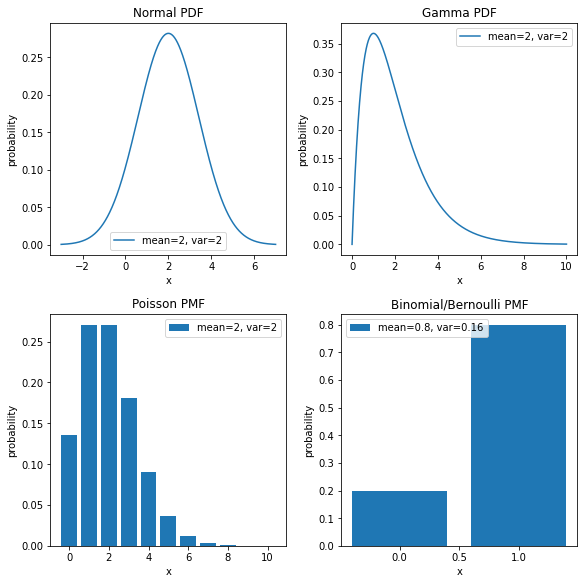 Some typical examples combinations are:

Once you have chosen the first four points, what remains to do is to find a good feature matrix X. Unlike other machine learning algorithms such as boosted trees, there are very few hyperparameters to tune. A typical hyperparameter is the regularization strength when penalties are applied. Therefore, the biggest leverage to improve your GLM is manual feature engineering of X. This includes, among others, feature selection, encoding schemes for categorical features, interaction terms, non-linear terms like x2.

The TweedieRegressor has a parameter power, which corresponds to the exponent of the variance function v(μ) ∼ μp. For ease of the most common use, PoissonRegressor and GammaRegressor are the same as TweedieRegressor(power=1) and TweedieRegressor(power=2), respectively, with built-in log link. All of them also support an L2-penalty on the coefficients by setting the penalization strength alpha. The underlying optimization problem is solved via the l-bfgs solver of scipy. Note that the scikit-learn release 0.23 also introduced the Poisson loss for the histogram gradient boosting regressor as HistGradientBoostingRegressor(loss='poisson').

After all this theory, it is time to come back to our real world dataset: diamonds.
Although, in the first section, we were analysing the marginal distribution of Y and not the conditional (on the features X) distribution, we take the plot as a hint to fit a Gamma GLM with log-link, i.e. h(x) = exp(x). Furthermore, we split the data textbook-like into 80% training set and 20% test set2 and use ColumnTransformer to handle columns differently. Our feature engineering consists of selecting only the four columns ‘carat’, ‘clarity’, ‘color’ and ‘cut’, log-transforming ‘carat’ as well as one-hot-encoding the other three. Fitting a Gamma distribution and predicting on the test sample gives us the plot below.

Note that fitting Ordinary Least Squares on log(‘price’) works also quite well. This is to be expected, as Log-Normal and Gamma are very similar distributions, both with Var[Y] ∼ E[Y]2 = μ2.

There are several open issues and pull requests for improving GLMs and fitting of non-normal data. Some of them have been implemented in scikit-learn 0.24 already, let’s hope the others will be merged in the near future:

1 Algorithms and estimation methods are often well able to deal with some deviation from the Normal distribution. In addition, the central limit theorem justifies a Normal distribution when considering averages or means, and the Gauss–Markov theorem is a cornerstone for usage of least squares with linear estimators (linear in the target Y).

2 Rows in the diamonds dataset seem to be highly correlated as there are many rows with the same values for carat, cut, color, clarity and price, while the values for x, y and z seem to be permuted.
Therefore, we define a new group variable that is unique for ‘carat’, ‘cut’, ‘color’, ‘clarity’ and ‘price’.
Then, we split stratified by group, i.e. using a GroupShuffleSplit.
Having correlated train and test sets invalidates the independent and identical distributed assumption and may render test scores too optimistical.